Cannabella is a company that makes a wide variety of specialty cannabis products, from their CBD breath spray and dog treats to their famous lozenges. For the most part, they sit comfortably in the sweets territory. They make their own canna gummies version of the classic peach rings, as well as the beloved watermelon sours made famous by Sour Patch Kids. They also make dried fruits, lemon bars, brownies, and even honey, for the side of your sweet tooth that wants some THC as well. I recently tried their Sweet & Sour Gummies, which are a unique product, rather than finding a basis in previous candy offerings. 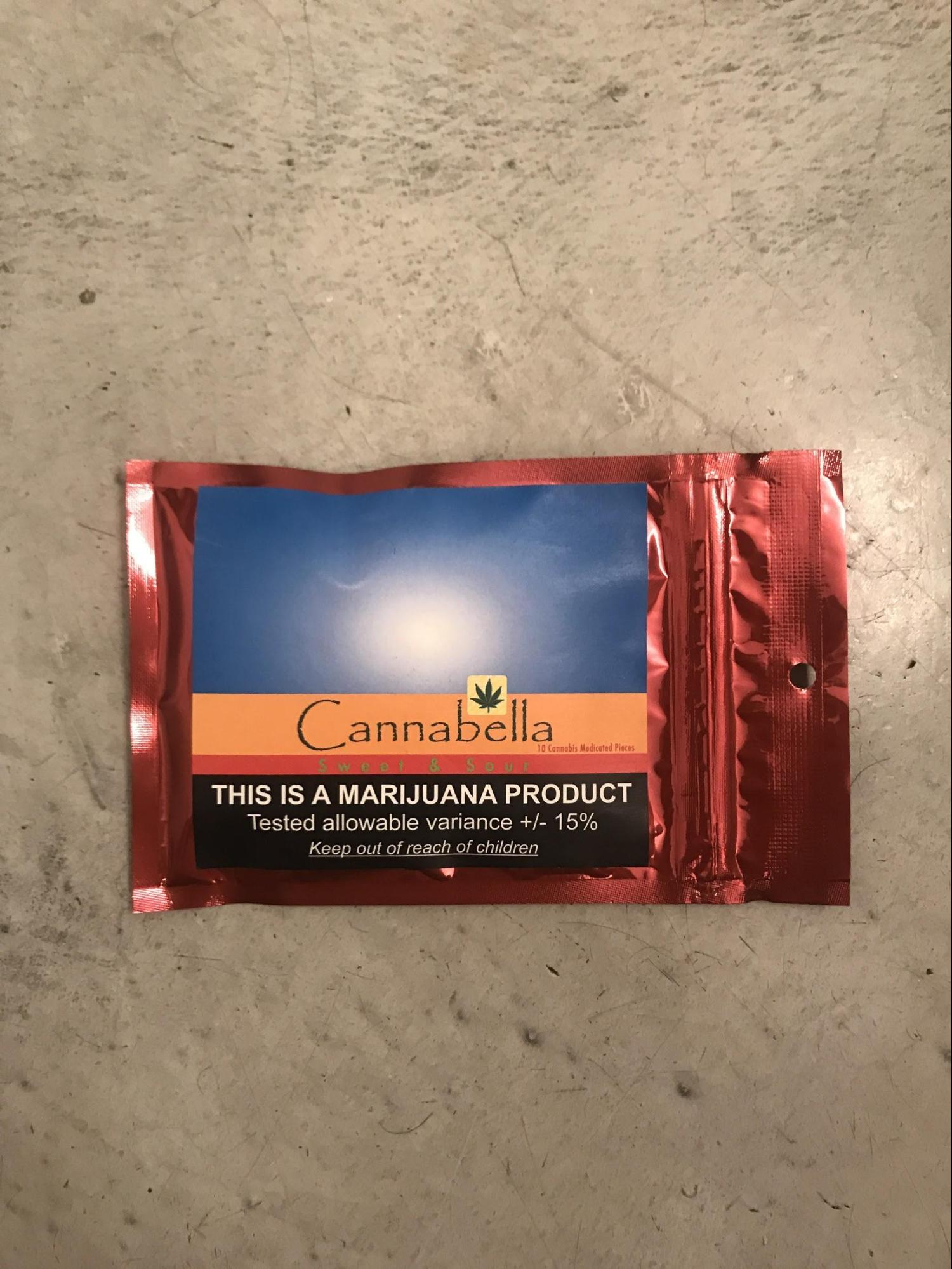 Make no mistake, this is a marijuana product! 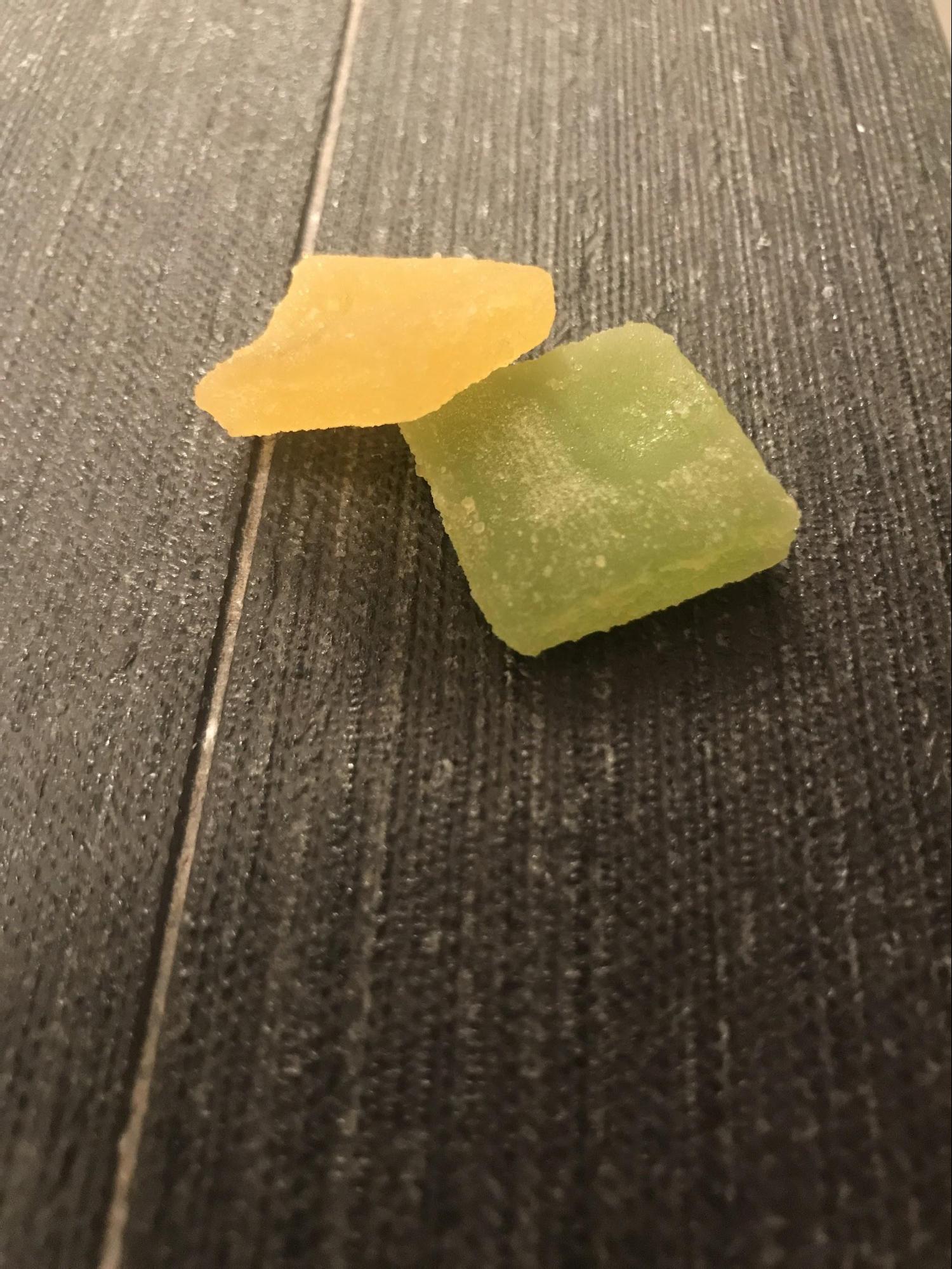 You barely taste the cannabis; it feels like you just popped open a bag of sweets

The fun thing about these gummies is that they’re enjoyable right off the bat. It’s an edible THC Candy, but the emphasis is on the candy when you pop one of these in your mouth. It’s a perfectly sugary-sweet flavor, and the sour comes from the lemon and lime flavors that go into these vegan candies. I would say the flavor is somewhat similar to that of the lemon and lime Sour Patch Kids, but without the rough coating and not as tough to chew. When I was done with my serving, I had to stop myself from reaching back in for another.

While the candy may not taste much like herb, it’s definitely in there, with around 8mg of THC in each square. That’s the only chemical though. You won’t find any CBD or CBN in there, so if you’re someone that needs a good amount of CBD for your anxiety, prepare to pair CBD oil with this product. As for the other ingredients, this is made with all-natural organic and vegan products.

When I took the suggested dosage, I found myself waiting a long time for the effects to kick in. Usually, edibles kick in rather quickly for me, but this one took over two hours to finally start producing any effect. As with any edible, if you’re doing it the right way, you don’t want to just assume the high will never kick in, so I was patient. As soon as that euphoria started to kick in, I quickly forgot what it was like before I felt anything. The climb was quicker than most edibles I’ve ever tried. It’s usually an easy set-in, and you get used to it as it comes up. This was an acceleration straight into the THC.

It was intense, but it was not overwhelming. I will admit that every time I stood up, I was a bit wavy, but it didn’t make mobility hard at all. I felt more wobbly in my head than my body actually acted. I thought that everything coming out of my mouth would be a mess, but I was actually fairly articulate. This was a total cerebral high, and it was great.

Most edible THC gummies sit more in the body, as far as their effects go for me. However, this one had me in such a euphoric mental place that I was reminded that THC is technically a hallucinogen. My thoughts were all over the place, and my perception warped pretty much everything I sensed, but it was never scary or worrying; it was pure fun.

I thought I would get really hungry or just enjoy eating, but surprisingly, food didn’t come to mind at all during the experience. I had a light dinner before I took the gummy, expecting to pig out, but nope; I totally forgot to eat the snack I had planned out.

How Was the Sleep After?

These canna gummies did keep me up a bit when it was time for bed. I was physically exhausted, but my mind still had places to wander. That was fine by me, though, as I was in the mood to rest with my thoughts. I live in a room with a bit of a draft, so every time I saw a cloth move, I definitely went straight to thinking that there was an animal around, but this made me curious, rather than worried.

When I finally did fall asleep, I didn’t wake up until my partner’s alarm went off, and I was definitely still feeling those canna gummies. It took me a bit to finally get up and to get ready for the day, but it wasn’t a major issue.

The bottom line? I would recommend this edible THC candy to anyone that’s trying to have a semi-trippy experience and can resist binging on a whole bag of them (unless you can handle it).